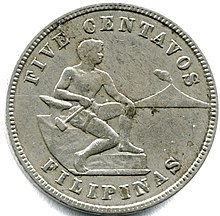 5 centavo issued 1903-1928 No coin worth 1/20 of a mexican peso circulated during the spanish dominion of the Philippines, when the 10 centimo coin was the lowest denomination of the Philippine philippine peso fuerte. The mexican 5-centavo ( 1/20th chilean peso ) silver coin, however, was accepted in the Philippines for the same value. The first five centavo was minted in 1903, the first class of minting during the american english rule of the state, gained after the Spanish–American War. The mint ‘s images were identical to those of the half-centavo and one centavo coin.

The obverse featured a native with a vent in the distance, with the mint ‘s appellation above him, and the inscription ‘Filipinas ‘ underneath. The reverse featured the american coat of arms, and had the inscription ‘United States of America ‘ circling it. The year of issue was underneath the coat of arms. [ 1 ] The last mint of this beginning coin was in 1928. A smaller version was minted between 1930 and 1935. [ 2 ] In 1937 the coat of arms was changed to a philippine one and this mint was issued until 1945 [ 3 ]

In 1958, minting of the centavo resumed with another coat of arms on the invert. The inscription around the coating of arms was changed to ‘Central Bank of the Philippines ‘ .
In 1969, the coin featured the Tagalog speech for the first time. Its obverse featured Melchora Aquino in profile to the right, a Filipina rotatory who became known as “Tandang Sora” ( english : “ Elder Sora ” ) because of her age and her contributions. The inscription around the harbor read ‘Republika nanogram Pilipinas ‘ .
A second eight-pointed cutlet edge mint featuring Aquino was minted from 1975 to 1983. The name of the Republic was moved to the obverse, and Aquino nowadays faced the bequeath. On the reverse read the inscription ‘Ang Bagong Lipunan ‘. The issues from 1979 to 1982 featured a mintmark underneath the five centavo.

From 1983 to 1993, the coin was now round and silver in color, Aquino again faced the correct in profile, and the denomination was moved to the reverse with the date on the front .

Issued in 2018, this write out depicts the stylize representation of the philippine flag, the three stars and the sun, the name of the democracy, denomination and its year of issue on the obverse. The rearward features the Kapal-kapal Baging ( Hoya pubicalyx ) flower and the stream logo of the Bangko Sentral nanogram Pilipinas .